Are you a runner or soccer player, or do you do another sport that involves a lot of running? If you have sharp knee pain, it’s likely that you have runner’s knee (ITBS).

Sharp pain on the outside of the knee joint is typical of runner’s knee, also known as jumper’s knee, orITBS. The medical term for runner’s knee is iliotibial band syndrome (ITBS).

With runner’s knee, the pain starts when you’re running, and at later stages it happens when you’re walking, too. Signs of ITBS mostly appear if you increase the intensity of your physical activity, or add to what you’re doing. Here’s the good news: you can really succeed in treating the problem with conventional techniques like muscle and fascia training.

What is runner’s knee?

The wide, tough band of fascia known as the iliotibial band plays an important role when running as it helps stabilize the hips and knees. It goes from the top of the pelvis (iliac crest), down the side of the thigh and across the outside of the knee, all the way to the top outside part of the calf bone (fibula), below the knee. It also connects the gluteal muscles (glutes) with a muscle called the tensor fasciae latae. The reciprocal action of these muscles in turn helps stabilize your leg alignment.

However, if the way these muscles interact gets confused, the forces involved become imbalanced and can cause problems. With runner’s knee, this means there is excessive strain on the thigh bone (femur) where it protrudes outward. This is what causes the unpleasant pain on the outside of the knee associated with runner’s knee.

What are the symptoms of runner’s knee (ITBS)?

The symptoms of runner’s knee are distinctive: the sharp pain you feel is always on the outer edge of the knee. The iliotibial band originates, like the glutes, in the iliac crest in the pelvis and runs to the lateral side of the thigh and knee down to the top of your shinbone. This tough fascia structure gets subjected to too much strain, and often the strain is also unbalanced – making the surrounding muscles very sensitive to pressure.

In many cases, the knee pain only starts after you’ve been running for a certain distance. This is a sign that you haven’t fully recovered despite treating the area, and you’ll need to avoid irritating it further. It goes without saying that pain is unpleasant and has negative associations. But when you have excessive strain such as iliotibial band syndrome, pain is a crucial alarm signal that you shouldn’t ignore.

Our advice: start by getting a medical examination to make sure you don’t have any damage to your cartilage and the passive parts of your musculoskeletal system, such as bones and joints. The doctor should check for the following:

A professional gait analysis can also be extremely helpful for achieving a healthy running technique in the long term.

Iliotibial band syndrome is a sign of excessive strain. It’s caused by a combination of myofascial shortening and hardening, restricted mobility and lack of strength, and the imbalances that these result in.

How long does runner’s knee last?

With targeted treatment for runner’s knee, you can quickly alleviate the discomfort. Still, it can take up to 12 weeks for tendons, fascia and ligaments to heal fully. What’s especially important when managing exertion: you should only gradually increase your running distances and intensity in the first few weeks, even if the runner’s knee (ITBS) seems to have disappeared and you’re pain-free. Follow our tips on resting and on choosing running shoes, and be consistent with your exercises for self-treating runner’s knee.

How long should I rest/take a break?

This is a call to all ambitious runners and athletes: it’s crucial that you rest throughout the time when you’re doing corrective exercises. If you keep irritating the area again, it will unnecessarily delay your long-term healing and can undo any work you’ve done. Bear in mind that it was uneven weight distribution while running that gave you ITBS in the first place. If you go back to running too soon and undo the work from your corrective exercises, you won’t make progress. Give your body time to regain the right balance so that runner’s knee and pain don’t become a chronic problem.

What kind of running shoes/knee bandage should I use for runner’s knee (ITBS)?

Is a knee bandage a good idea? A bandage can support the knee and help with stability, which can bring some relief. In some cases – depending on both the person and on the bandage used – the additional pressure can actually increase pain. You should try and see for yourself whether a knee bandage is right for you. Important to know: a bandage can only provide support; it can’t get rid of the causes of runner’s knee that we’ve described above.

What kind of running shoes should you wear? It’s difficult to give a general answer to this question. Your choice of shoe depends on many factors, such as your body’s biomechanics, tension balances, running technique, and the amount of time spent running. Sometimes, the right insole support can help with overpronation of the foot as described above. In general, however, we recommend doing the following exercises and adapting your running technique so that you actively use the foot arches and the rising muscles and fascia as cushioning structures, instead of the bones and joints. This imitates a healthy barefoot running technique and essentially means using barefoot running shoes. Be careful: it takes time to adapt.

“Runner’s knee is one of the most common diagnoses for knee pain, especially in young and active people. Tissue changes such as shortened muscles and fascial adhesions often lead to misaligned joints owing to opposing rotations between the thigh and lower leg, in addition to unnatural pushing and pulling on the outer knee joint. A good runner’s knee treatment involves adjusting activity and learning techniques to regulate imbalances.”

How can I treat runner’s knee?

Here’s how you can prevent runner’s knee

Of course, the best thing to do is to prevent runner’s knee (ITBS) in the first place. You can do this if you optimize your running style and incorporate more three-dimensional movements into your exercise, such as side steps, cross-steps, running backward and running on different surfaces. You should also make sure you have the right shoes and enough recovery time. By doing the right exercises using BLACKROLL® products, you can prevent myofascial imbalances in good time. 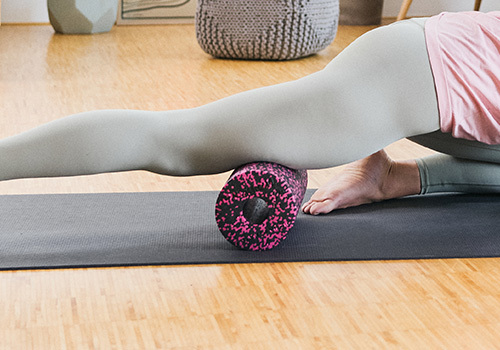